I've been playing around with PicMonkey for the past week and have been obsessed preoccupied with the daguerreotype-shiro effect. I love how it fades the picture and leaves the essence of the subject, almost as though it is a faded memory. Not every picture works well with the effect, but when I hit upon one that does work, I get very excited. I had a great time playing around with some ranunculus flowers and the daguerreotype-shiro effect, that is what started it all. Then I couldn't stop. This week's moving picture, and Texture Tuesday photos fell victim to my obsession preoccupation.

The theme for this week's Moving Pictures Monday is Shape. I decided my nesting matrioshka dolls would be the perfect subject.

For Texture Tuesday I tried something a little different. I just converted the color photo to sepia and tried to create the Daguerreotype-shiro effect using textures. It didn't quite turn out the way I wanted, but I was satisfied with the results of the textures. 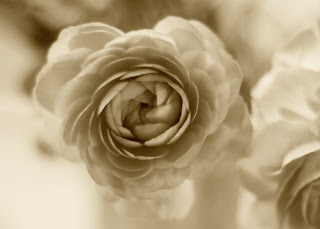 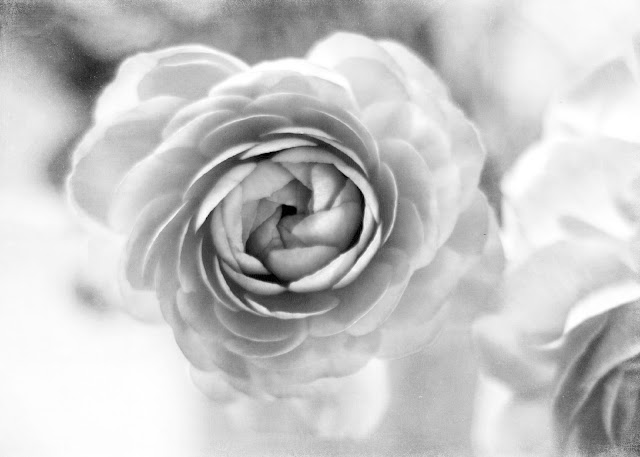 Both of the above pictures were textured using the following Kim Klassen textures: Faved, Happy Heart, Wonderful Magic, and Pumpking Grunge. I also used the Define & Sharpen action by Texas Chicks, along with various other layers adjustments. 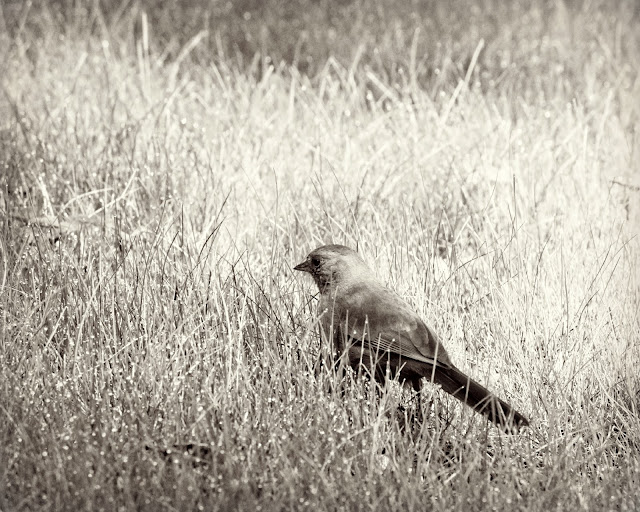 I couldn't help but post these last two photos. They are my favorite of the experimentation I did with the daguerreotype-shiro effect. I took these early Saturday morning before the sun had time to come out and dry the dew on the grass. 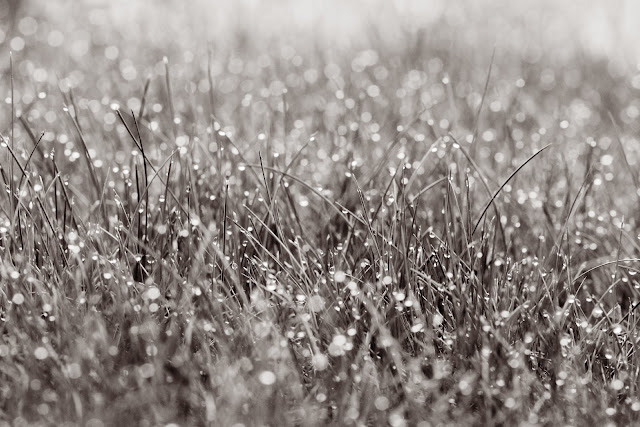 O.k., time to get posting and see what everyone else is up to over at

is this week's homework over at Kim Klassen's Beyond Layers~52 Weeks of Inspiration. Here is my straight-out-of-camera shot, with a square crop. 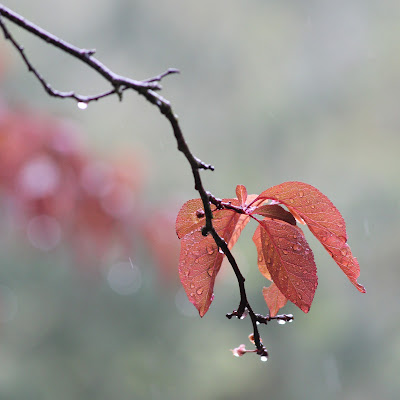 I took this photo on a beautiful rainy Saturday morning. I wasn't sure what I would ever do with it, but decided to give it a go for the Beyond Layers homework. It was a lot of fun and I was pleased with the editing effects below. 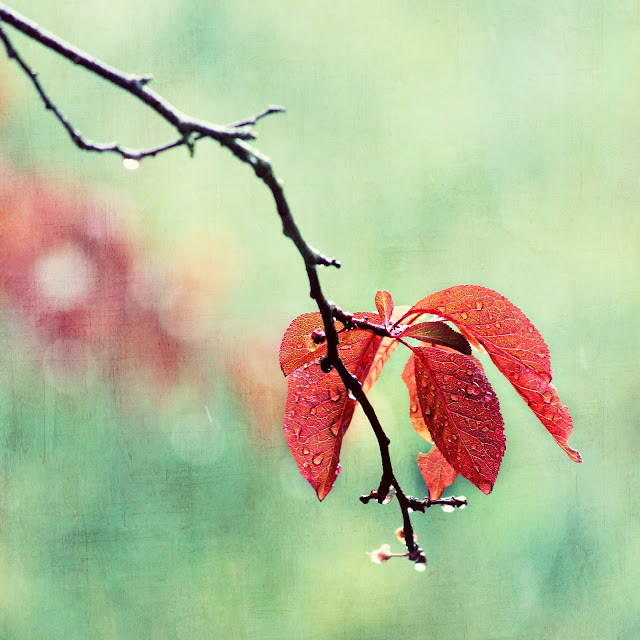 For this one I used Kim's texture I Am and then ran it through Rad Lab with the Rumpus and Meadow Lark stylets. 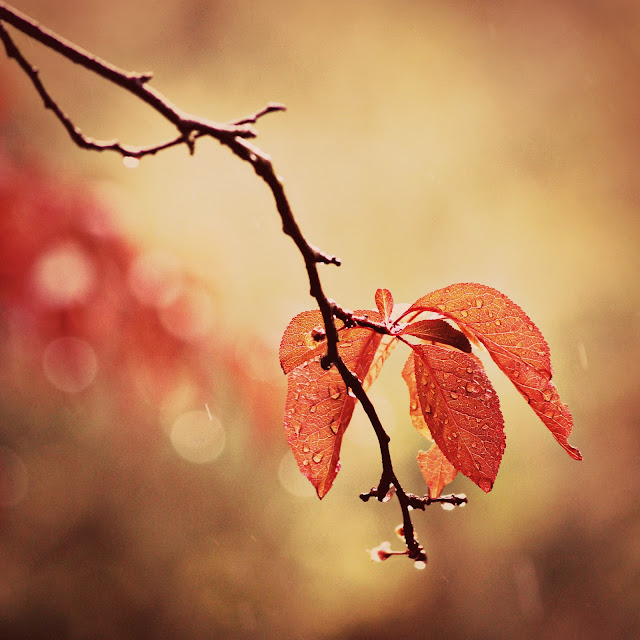 This one I decided not to use a texture, but to run it through the newly developed on-line editing program PicMonkey. I have to say, that I am impressed with the program and look forward to the new additions I find each time I go there. It is quickly becoming one of my favorite editing programs.  Anyway, for this photo I used the Dusk and Cross Process Red functions, at varying levels. 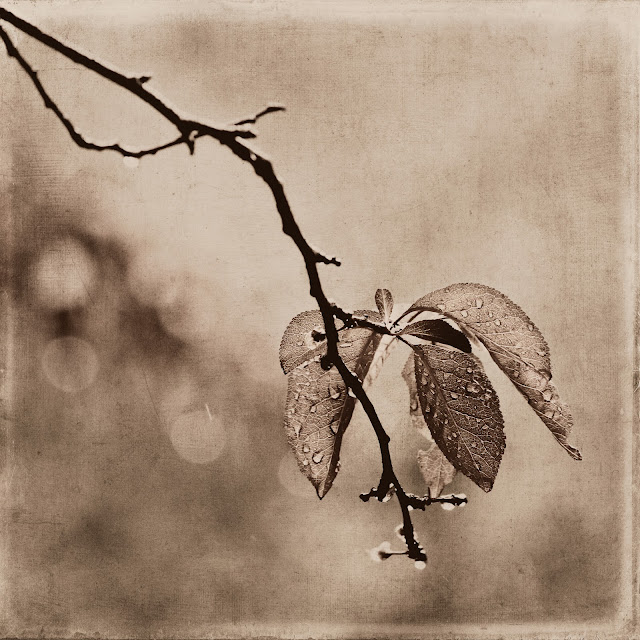 I also used PicMonkey on this photo. With PicMonkey, you can upload Kim's textures and apply them as simply as in Elements. I used Kim's Framed texture and then processed it using the curves default function Daguerreotype Shiro. That was one of my favorite effects in Picnic, so I was delighted when PicMonkey added it to their curves functions.


O.K. it is time to get posting to see what wonderful edits everyone else has come up with.
Posted by Cathy at 10:25 AM 10 comments:

I bought these flowers on Easter Eve. I loved the color of them, they reminded me of watercolors. I didn't have as much luck as I would have liked when photographing them, but I did manage a few shot that I liked. Here is one that I played around with using Kim's textures and a few Rad Lab stylets. I couldn't choose my favorite, so here are a few edits of the same photo... 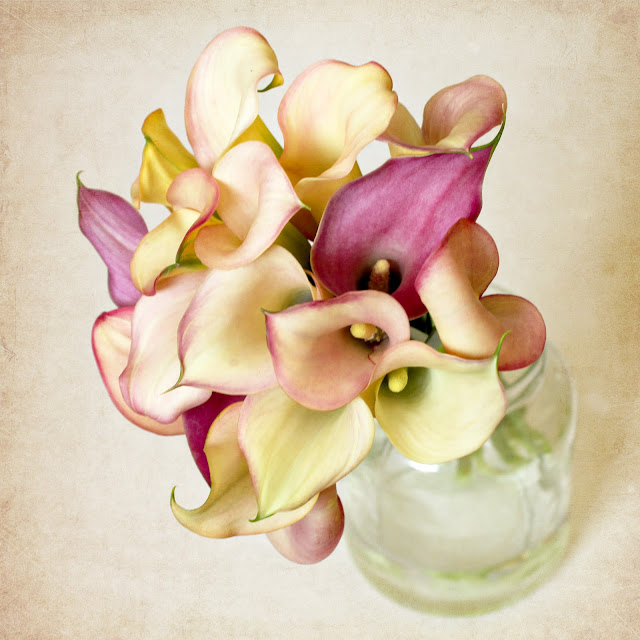 This week's Texture Tuesday  eDition is free choice with any Kim Klassen textures. In the above photo I used the textures: Plaster Squared, Grunged Up, Happy Heart, and Warm Sun. 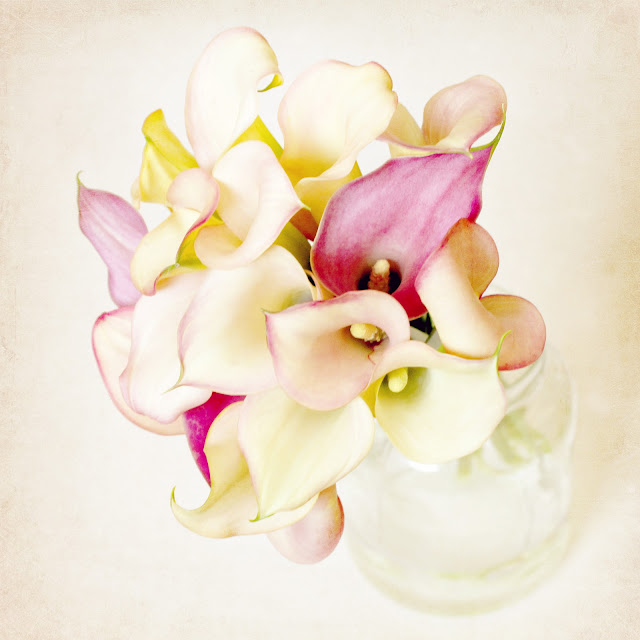 With the same Kim Klassen Textures, I added the stylets from Rad Lab: Clarify, Divine Light, and Fuzzy Navel. 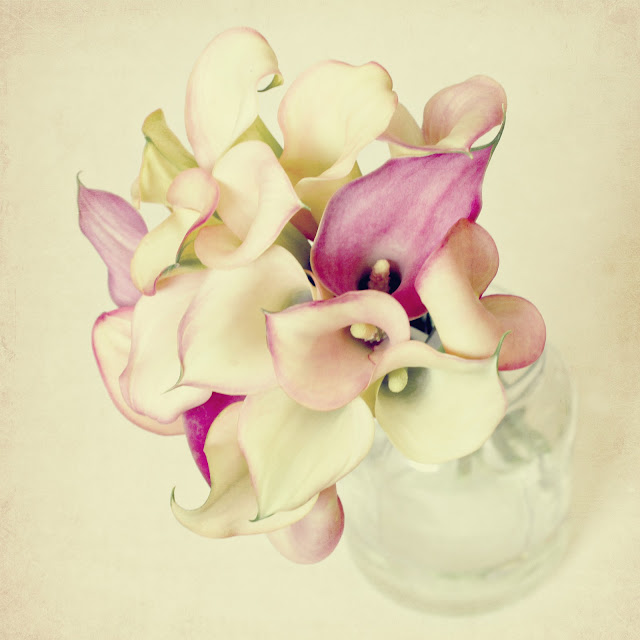 With this photo, I added the stylets: Montecito and Get Faded Winter. 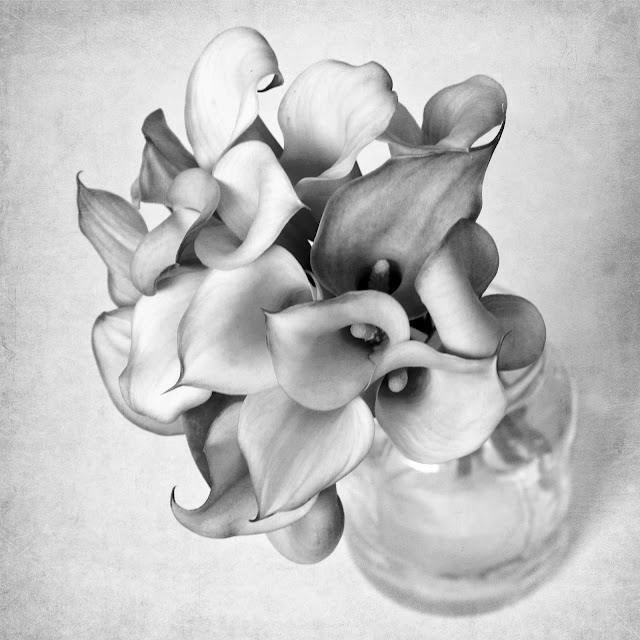 I couldn't resist trying it in black and white, so I added the stylet Graphite.

O.K. that is enough playing around, time to get posting and see what everyone else is up to over at
Texture Tuesday

I went out Saturday looking for shadows to take photos for Moving Pictures Monday , and I was drawn to the dancing shadows of a tree.  It was high noon and the sun was shining through the frondish leaves, casting a feathery and wispy bokeh type shadow. It looked so delicate and beautiful, I just had to capture it in my moving picture. Sadly it didn't translate so well into pictures : (
I was happy with the ant action going on in the bottom left corner though : )

I tried capturing the same bokeh shadow again, but still no luck.

I have to admit that I was a bit disappointed, but I'm still happy with the final results,
so I'm posting over at

Click on the link below to get directions on how to make moving pictures...
it's just how i see things
Posted by Cathy at 10:30 PM 5 comments:

I came upon this bird after spending the morning walking in the woods looking for things in nature to photograph. I thought I'd found a few good subjects for Moving Pictures Monday, and was ready to call it a day. On my way to the car is when I came across this bird and its buddy. They were going about their business and couldn't be bothered by me. I decided to take advantage of the moment and capture them. I steadied my camera on the top of a trash container, and started shooting. I think they were gathering material for their nests, but maybe not.  I love photographs of birds, but don't have the proper lens to capture them from afar. Usually I scare them off by the time I focus my lens, so I was really excited that they didn't mind my presence. Here is one of them busily taking apart a spent dandelion.

“Enjoy the little things, for one day you may look back and realize they were the big things.”

The theme for this weeks Moving Pictures Monday over at it's just how i see things is Words. I didn't incorporate the words in my moving picture, but I did put them above it. It is a quote I saw floating around the blog world this week. It truly was a small wonder to have these birds so close and still going about their business, but for me it was also a really big thing.

P.S. Here is the other bird. It is a bit darker and plumper, so perhaps it is a she and is getting the nest ready to lay her eggs. 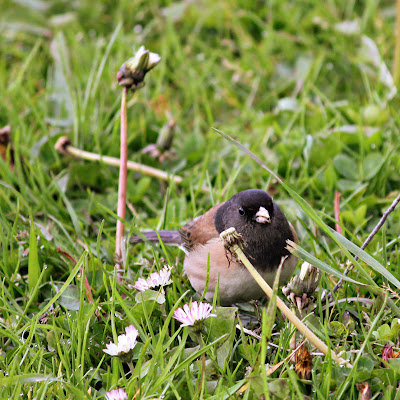 Ok, time to get posting over at...

I love to edit pictures, that is no secret : ) The before and after photos always amaze me, guess that is why I love mouseovers. I get as excited as a child when I come across them, so I decided to incorporate some edits into my moving pictures that I'll be posting over at georgia b's blog for Moving Pictures Monday. I can't take credit for the idea, as I borrowed this idea from Candace over at GLENROSA JOURNEYS. I recently received one of the Rad Labs editing plug-ins as a gift, so I thought I'd put it to work in my next moving pictures post. I used the following SOOC TtV picture, and once I had it straightened and cropped, I ran it through the Rad Labs stylets. 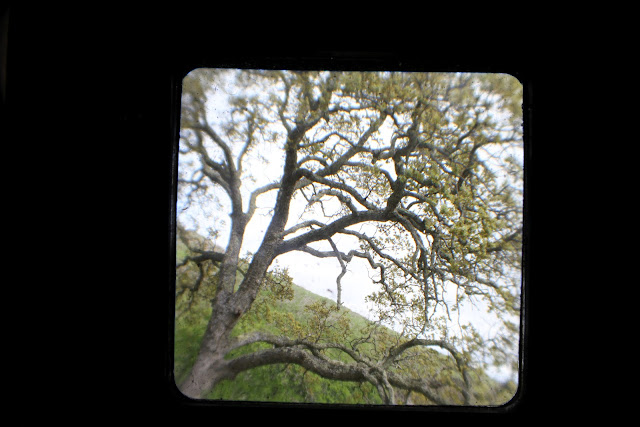 This is a compilation of the results...

I've decided that Monday will remain a twofer day. So in keeping with the theme of this post, I've decided to incorporate Texture Tuesday's theme, Soft, with my moving edit and a faux TtV frame. I took this photo with the soft mist and added Kim Klassen's textures: Happy Hearts, Mayzee, Portrait, and Edward. Then I added a frame in picnik to resemble a TtV frame. 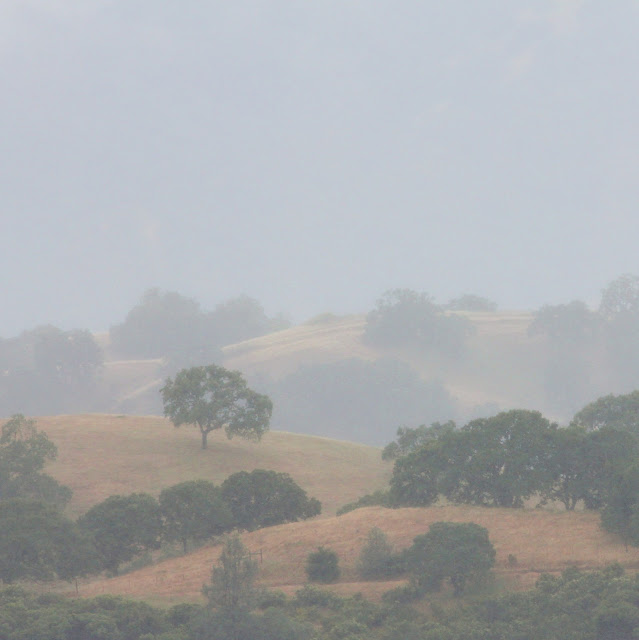 And here is the result...a moving textured picture of the soft mist that envelops the foothills of Mt. Diablo. It's sort of a mouseover, but you don't have to do any work : )

Or if you prefer, the non-moving picture... 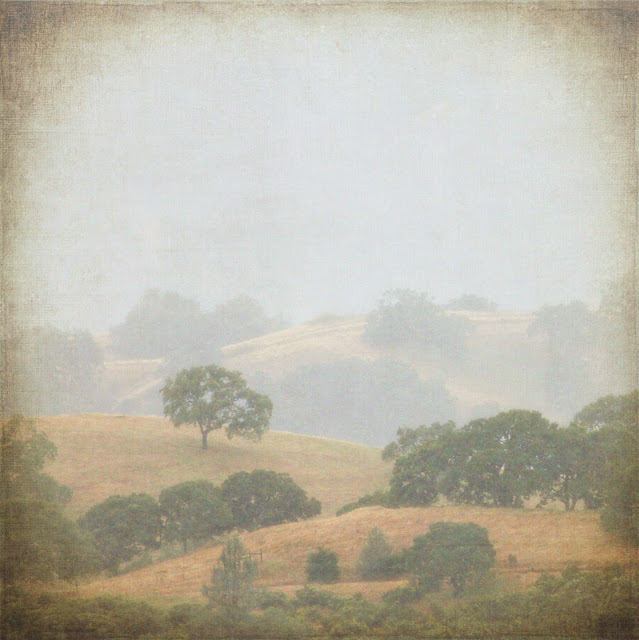 Time to get posting over at...